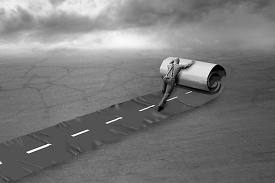 I have decided to start a series of posts on the steps translators took to climb the translator’s ladder, in other words, what various translators did after graduation until they became freelance translators. I will act as the first episode of the series! Here we go!

After I graduated from University of Warwick with my MA in Translation Studies, my first thought was to find a job. I was living that time in Sheffield, UK and I was applying to any job that would strike my fancy. I did not really know what it was that I actually would like to do as a career, so having my languages as my weapons for battle, I was applying to any posts asking for languages. A friend of mine at the time (also a translator) was working for IBM in Manchester UK and whispered in my ear that the company was hiring staff! Great, I thought. I applied, I got hired, I worked for IBM for seven months. There, I got quite quickly involved in IT terminology, a field that would prove to be very important in my future career later on (at the time, I had not realized). Then, I saw in the paper that Exxonmobil was asking for staff. I applied, I got hired, I stayed with the company for 5 years. Exxonmobil was a fantastic company to work for and the fact that I could practice my English and German in an environment I loved was a work place heaven for me! After the end of the 5th year, a strange lust for creation started to grow. I wanted to make something of my own. I wanted my very own translation office! That was the point when I made one of the biggest decisions of my life: within two months I had packed everything  I owned in carton boxes after living in England for 10 years  and headed back to the sunny island of Crete.

And so, I established my translation freelance office and had a few clients in the local market. Not too long had gone by when a friend of a friend of a friend told me about another translator, our most beloved Catherine Christaki (aka @linguagreca), gave me a phone number and told me to call her! And so I did! We met when Catherine and Chris visited the island (Catherine was born in Crete but we lost her to this wonderful Athenian, Chris) and it was her that started applying the magic to me and putting the first seeds in my head to expand and offer my translation services to agencies abroad… The rest of the story you already know! And if you don’t, do go through past posts in my blog!

In the professional course of a freelance translator’s career, a translation agency from hell is…

So, graduation! A Translator? And then what? Anna’s story!

Being a student at the faculty of foreign languages, I used every opportunity to practice…